The last two C&G Stars have been from my Level 3 group so I think it’s only fair that I bring a Level 2 student’s work to your attention. The first Level 2 student I want to highlight is Eve Muir who has successfully completed her Level 2 at the end of last month. In year 1 of the course Eve produced a beautiful panel in machine embroidery based on a wild flower garden she has at home. This year she produced a hand made felt tryptych which had as its inspiration the marran grass of a Scottish seashore and the finished piece produced many positive comments from both visitors to the exhibition as well as the External Verifier.

The secret to producing a successful piece of textiles is having a source of inspiration that truly inspires you. In this project Eve blended the colours of the sea in the felted pieces with a layer of machine embroidered marran grass, giving the feeling of the grass blowing in the wind, the sometimes biting North Sea wind that batters our coast. She picked exactly the right colours for the marran grass which offset the blues of the rough sea in the felted tryptych. The machine embroidery was stitched on a near invisible net which disappeared against the felted background. Eve manipulated the felted by stitching tucks and pleats to evoke the waves and felted bandage muslin into the felt as she worked it. The piece was hung from an acrylic pole which ‘disappears’ against the wall leaving the textiles as the main interest.

Throughout the process there were changes made, problems encountered and overcome, but the finished piece I hope you agree is most successful. 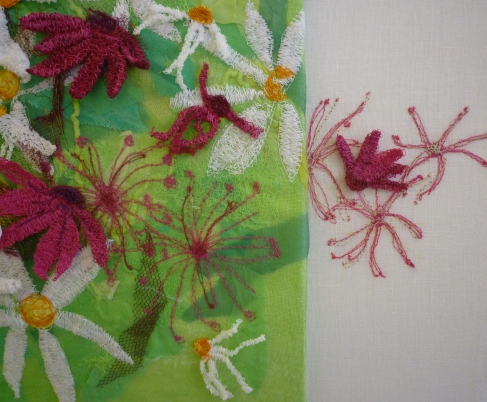 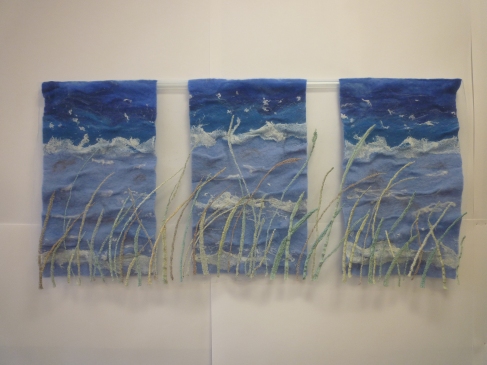